Apprenticeships are a vital in giving experience and jobs for our young people – so I was delighted to meet those providing, and benefiting from, those opportunities in Parliament.

National Apprenticeship Week is 4-8 March this year, and I would encourage you to attend an event local to you to understand more about the various post-education opportunities you have. You can access more information here: https://nawevents.co.uk/

World Cancer Day helps to raise awareness of the scale of the challenge and the role we can all play in the fight against the disease.   Greater awareness is key and we must do more to tackle preventable risk factors.  I was pleased to meet Cancer Research UK to hear more about the work being done in Sevenoaks, and I will continue to work with our local NHS staff to drive down waiting times for treatment.

The Queen’s Commonwealth Canopy is a unique network of forest conservation initiatives involving all 53 countries of the Commonwealth.

As part of this project Sir Michael has planted 5 saplings in the Sevenoaks constituency recently:  two Silver Birches on Brittain’s Common; one Hazel in Swanley Park; and two Rowans near the Bradbourne lakes.

The 5 saplings sent to Sir Michael were donated by the Woodland Trust with the support of Sainsbury’s and are part of an initiative which has seen over 500 MPs in the UK becoming involved with the Queen’s Commonwealth Canopy project.

Security co-operation, Gibraltar, fishing rights, the fight against serious crime, the role of the European Court – all these things are important. But in the end, Brexit is a negotiation about trade: how we continue to trade in the European markets and how we reach new free trade agreements with countries across the world.

Nobody doubts that the Prime Minister has tried her very best. But neither the Withdrawal Agreement nor the political declaration with which she has returned give us any certainty whatsoever about our future trading relationships. The pledge that both sides will simply use their “best endeavours” is legally meaningless and of no comfort to businesses now faced with two, or even three, years of further uncertainty.

This simply isn’t good enough. It’s certainly not worth paying £39 billion for. Nor is it sensible to surrender our voting and veto right at the start of the next set of negotiations without any guarantee that our continental trade will continue as smoothly as now, nor that in any future trade agreement we will be allowed – allowed ! – to reduce our external tariffs with new trading partners overseas.

The very presence of the backstop – legally binding on us if the Commons passes this deal – illustrates the leverage that each of the 27 EU member states will have over the free trade agreements that we want.

I think this is a huge gamble, and one in which we are putting all our cards face upwards on the table at the start. President Trump’s warning that we may not be able to trade with America after Brexit is a stark reminder of just how much power the EU will have over our trade agreements. If they don’t suit Europe too, then the external tariffs stay in place. Nowhere in the Withdrawal Agreement is there any provision for our unilateral exit from the backstop.

So we do need a better deal. And I should be clear that this should not be a delaying tactic to buy time for the arch-Remainers who want to find ways of simply staying in. Though I and the Prime Minister voted Remain, she is right to say that we must fully respect the referendum result.

That means I don’t want a no-deal, with unknowable consequences, including preparations for turning the whole of my local motorway in Kent into a permanent lorry park. Nor could I support a second vote which would inevitably be just as divisive as the first. What I do want is a much clearer understanding of how our future trade will work. Aspiration is not enough, not least because nothing in the political declaration is legally binding.

What do we mean, for example, by jointly hoping to develop the proposed “single customs territory”? How similar would it have to be to the current customs union? Why does the declaration only commit the EU to “consider” the facilitation arrangements set out in the Chequers document?

There’s no reference anywhere to the frictionless trade so often cited by the Prime Minister. How much further compromise would be needed on our alignment with future EU regulations if the new economic partnership between the UK and the EU has to “respect” the integrity of the single market?

Many mistakes have been made throughout these negotiations (and yes I was in Cabinet and party to some of them). Too often we rushed ahead: triggering Article 50 before there was an agreed Cabinet position; accepting the backstop without thinking through the consequences for free trade agreements; underestimating the importance of the shared sovereignty of the island of Ireland.

I believe that we need to take stock now, and consider whether what is being proposed really will turn out to be in our long-term interest.

If the House of Commons turns down this Brexit deal, that means sending our team back to the negotiating table. It might even mean a few extra weeks or months before we formally leave. But that would certainly be better than risking another two or three years of argument as to what these vague declarations and aspirations will actually mean in practice, with all the consequent uncertainty for our businesses. We owe it to our people, Leavers and Remainers alike, to get this right.

Sevenoaks MP Sir Michael Fallon has today urged the Chancellor of the Exchequer to accelerate work on the Lower Thames Crossing.

The Lower Thames Crossing, which will take away 20 per cent of the Dartford Crossing traffic, is currently scheduled to open in 2027.  Sir Michael has urged HM Treasury to speed up purchase of the tunnelling machines and compensation for property owners by indemnifying the Highways Agency against the risk of project cancellation.

Sir Michael said: “The Lower Thames Crossing should be considered as a national priority.  Long queues at the Dartford Crossing are frustrating for everybody and are damaging our businesses.  We cannot wait nine years for relief.” 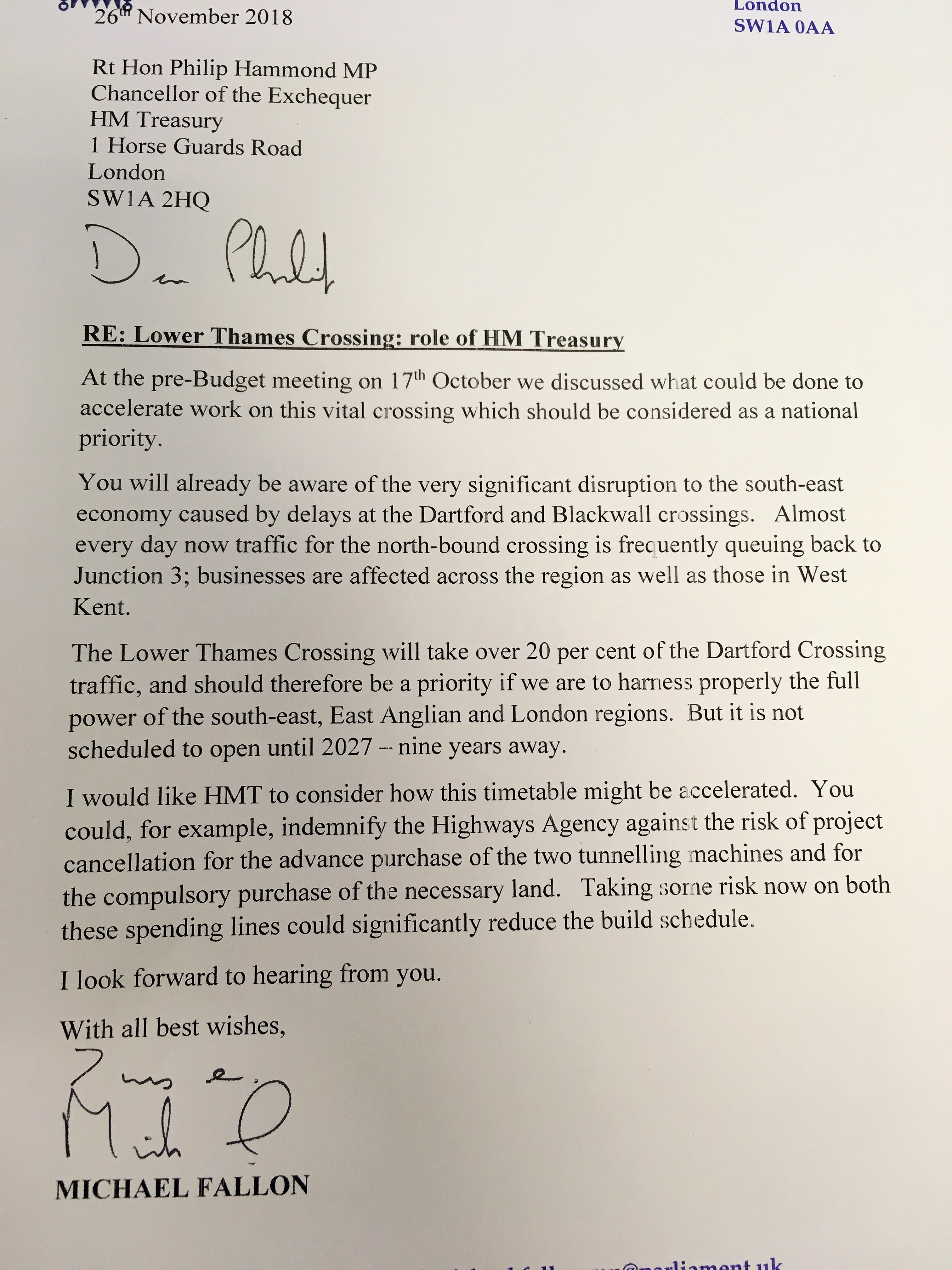 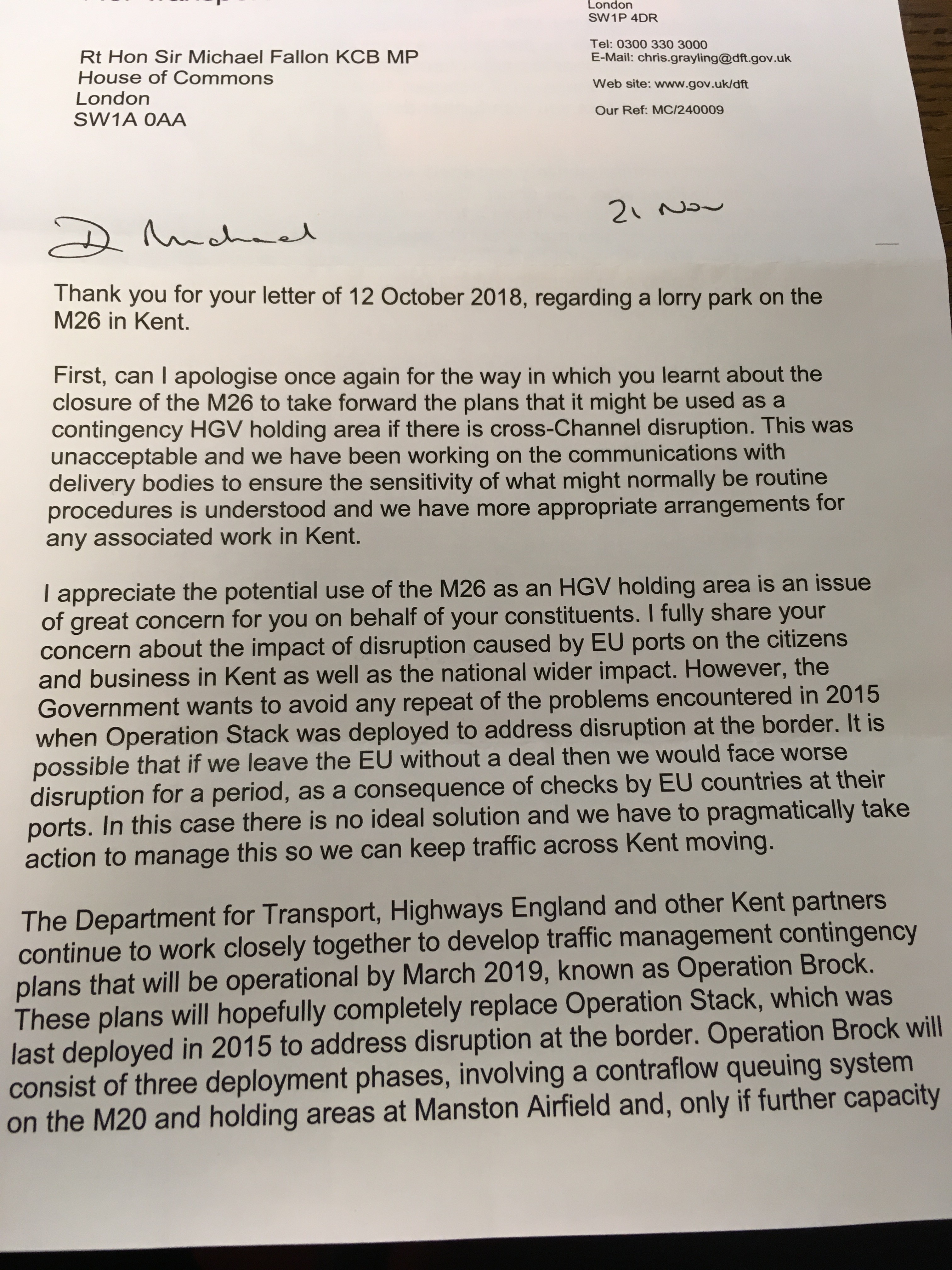 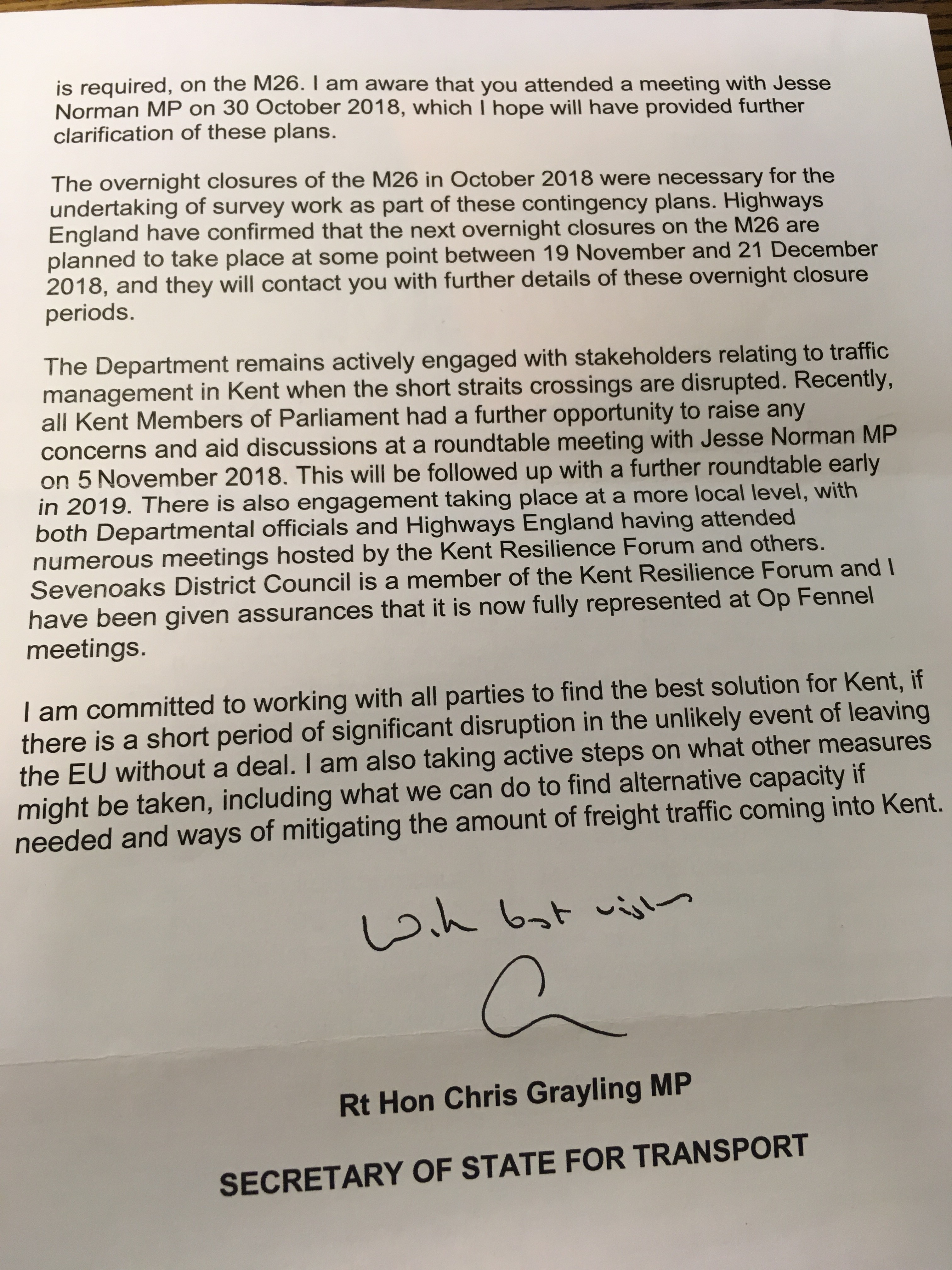 The Sevenoaks MP, who last weekend joined local residents to oppose the development, says he is “delighted” it has been dropped.

Sir Michael said: “I congratulate the campaigners for their efforts in ensuring Halstead’s Green Belt remains protected.  We do need more houses, but brownfield sites must be considered first.”

Michael today joined fellow Conservative colleagues to deliver a letter to the Prime Minister at 10 Downing Street, calling on the Government to stop the witch-hunt into our Northern Ireland veterans.

The letter, entitled ‘Defending those who defended us’, opposes the proposed new Historical Investigations Unit, which would re-open cases against veterans that have already been investigated.

Sir Michael said: “There can be no moral equivalence between our ex-servicemen and women who fought to defend us, and terrorists who wanted to do us harm. We must stop the hounding of our veterans, many of whom are now in their 70s and 80s – and defend those who defended us.” 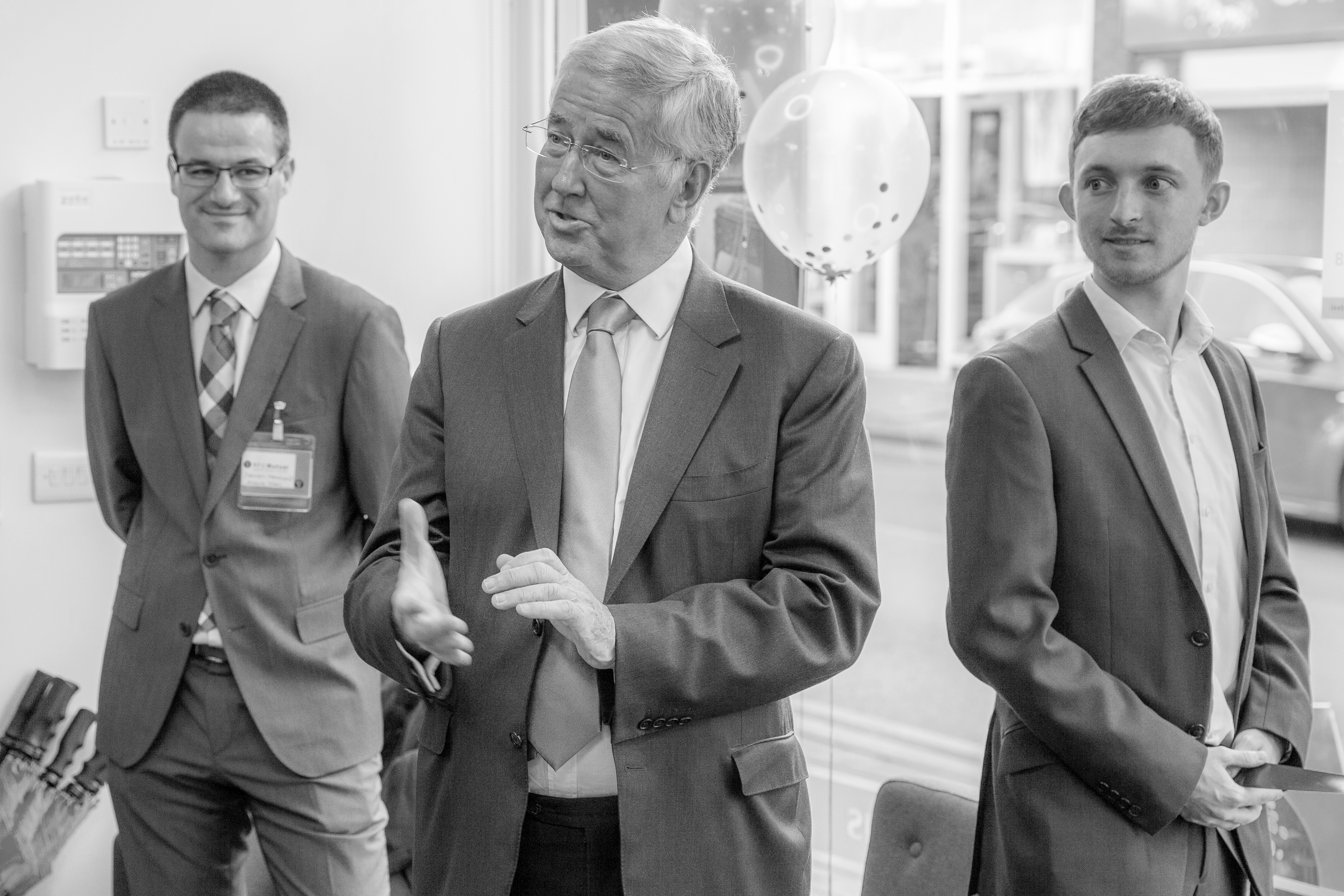