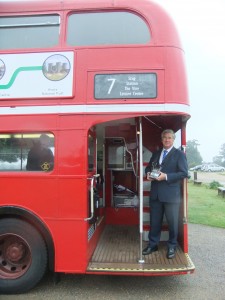 Michael was at Sevenoaks Bus Station to launch the new 401 silver service run by Go Coach – the Sevenoaks bus company.  He then rode on the newly purchased bus along the 401 route to Chipstead and back.

Michael said:  “I am delighted to see the new bus with its luxury leather seating and wifi.  The 401 is my local service from Sundridge to Sevenoaks and I am sure it will now attract much more custom.  I congratulate Go Coach on their new investment.