Michael has praised the ‘vital’ work of staff at a local Women’s Refuge.

The refuge, based at a secret location in West Kent, accommodates women and their children who have experienced domestic abuse.  For these families, the seven-room refuge is their only safe space.  Run by Look Ahead Care Support and Housing and managed by Yvette Hazeldon, the refuge provides families the time and security needed to reintegrate into society.

During his visit, Ms Hazeldon briefed Michael about the high demand for accommodation in the refuge, adding that the nature of the demand has changed because social media enables perpetrators to locate victims more easily. 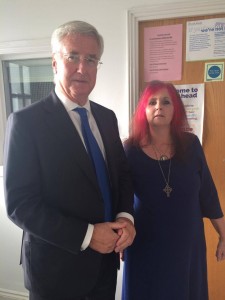 Michael told Ms Hazeldon that the Government will introduce a Draft Domestic Violence and Abuse Bill to bring to the justice system greater clarity about the impact of domestic abuse on families and encourage better response to the lifelong impact on children into adulthood.

He said: ‘My office regularly deals with cases involving domestic abuse.  This refuge provides a vital service in keeping families safe.  We will work together to ensure the Government are taking the right steps to support victims.’