Michael has welcomed the Transport Secretary’s announcement today that longer trains will now call at local stations on services to London.

In his announcement, the Transport Secretary said he is ‘confident passengers will notice the benefits of these longer trains immediately’, adding, ‘I am committed to getting passengers more comfortable, reliable and efficient journeys.’

The changes will affect stations across the constituency, including Dunton Green, Kemsing, Otford, Sevenoaks and Swanley. Maidstone East line trains will have more air-conditioned modern carriages with some peak-time trains doubling in length. On the Hayes, Baxleyheath, Woolwich, Sidcup, Bromley South and Grove Park lines, passengers will see a number of peak-time trains lengthened from eight to ten carriages while some six-car trains will lengthen to eight. 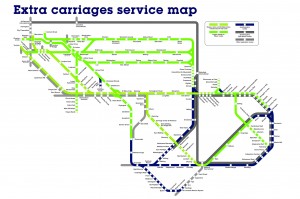 Michael said: ‘Southeastern are finally reacting to capacity problems I’ve highlighted for years. But these improvements could go further. That’s why I plan to meet Southeastern and Network Rail in the coming months to ensure passengers get a better deal now rather than later.’